The 2016-17 fire season got off to a quick start with two fires in 24 hours; a garage fire on Saturday and a house fire early Sunday morning. 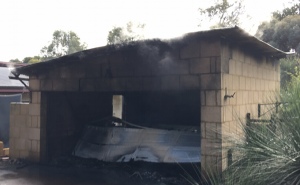 The fire in a garage in Zamia Grove was quickly handled by the Dunsborough and Coastal Fire and Rescue Services while our 4.4 provided water and support. The crew, lead by new lieutenant Andy, included Alan, Bruce, Noel and Tony, along with FCO Mark.  The incident was over in an hour and half.

The 4.4 was called out again at 5am to a house fire in Wildwood Road. The truck supplied water to Dunsborough, Coastal and Cowaramup Fire and Rescue crews as they attempted in vain to save the house.

Later the auxiliary pump arrived, freeing up another Cowaramup truck to deal with the fire. The Rural crew was the last to leave, blacking out eight hours after the callout.

Sunday’s crew included Andy, Dave, Mike, Pete and Tony. Ian and Mitch arrived with the pump.  FCOs Mark and Chris were in attendance.