This is the website of the Yallingup Rural Volunteer Bush Fire Brigade, headquartered 6.2k south of the Yallingup Post Office on Caves Road. The brigade covers an area of around 106 sq. kilometres. Its neighbours include the Yallingup Coastal, Dunsborough and Wilyabrup brigades. If you are interested in volunteering as a fire fighter please go to the New Members page under the “Contact Us” option in the menu above. If you are not keen on fighting fires but want to help, we are also looking for auxiliary volunteers.  For more information click on New Auxiliaries. Without volunteers there is no brigade.
The brigade is a not-for-profit organisation and any  contributions would be much appreciated. The brigade is authorized to accept donations which are tax deductible. Our Charity ABN is 82930679221 and you can reach us via “Contact Us“.

This website will NOT be updated during a fire although it will carry bushfire alerts from DFES in the box on the right. However these could be delayed up to 15 minutes. Click here for the very latest  DFES South West alerts..

The latest news about the brigade follows below:

The brigade was called out around 8.45 am on Tuesday 31st March 2020 to support Fire and Rescue with a truck fire a few hundred meters from Goanna Galley restaurant in Hayes Road.

Crews were Alan Yardley, Craig Saunders, Rob Poyton on the 3/4 and Ross Miller, Todd Kerr and John Stevens on the 4/4.  The 12/2 From Vasse was also present along with Mark Titchner driving Dunsborough’s 4/4.

The cause of the fire is still undetermined. No injuries were reported and the truck was not directly under nearby power lines.

An electrical fire in a transformer at Brushwood Drive and Commonage was investigated Sunday 29/3/20 by YRVBFB FCO, Mark Fisher,  and attended by three brigade members, Mick McGlenaughan, Emma Pinnell and Duncan Gardner.  The YRVBFB Light Tanker was deployed on standby but, in the event, there was no need for further intervention and the incident was covered by Western Power also in attendance.

On the afternoon of Monday 30th December 2019, a fire was reported near Sainsbury Loop, Injidup.  Quick and effective action by local residents who were first on the scene was a major contributor to the containment of the outbreak.  Support arrived from local fire brigades in the form of around 50 volunteers and more than 14 fire trucks. This was further supplemented by helicopter and fixed-wing water bombers.

The fire was contained and controlled on the same day. The cause of the fire is  considered suspicious. 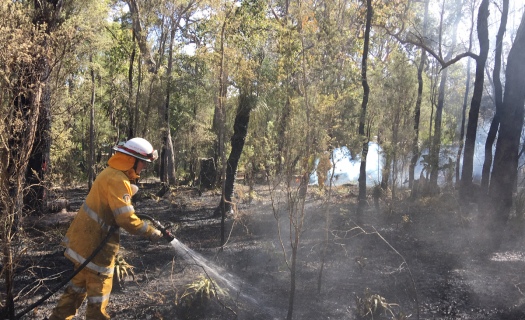 A private burn carried out over the weekend came back to life Thursday with Dunsborough and Rural brigades called out to extinguish it.

The fire, although out on the surface, had continued to smoulder underground until midday Thursday when it erupted. The 4.4 with Allan, Andy, Rob and Steveo and the Light Tanker with Emma and Tony turned up. It was decided by FCO Fish that due to the possibility of the fire reigniting again, it was best to burn the whole block.  So the crews spent time clearing around trees, stumps and fallen logs. The unburnt areas were ignited and over the next two hours the fire was monitored, trees were protected and it was eventually blacked out. A variable wind picked up from time to time, keeping everyone on alert. The whole operation took three hours.

The brigade has had a very busy week in the runup to the introduction of permit season.  It helped out at DFES and CoB burns and put out an overly enthusiastic private burn. 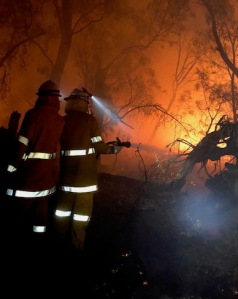 Crews were on standby Tuesday and Wednesday for a long awaited DBCA burn in the National Park from Yallingup Hall to Biddle Road. Both days the fire was called off at the last minute. Not to be put off, the 4.4 went to Collie Wednesday for a burn with Andy, Bevan, Rob and Pete on board. After over two hours driving through scenic country they worked wth an experienced DFES team on a 4 hectare burn. Under light winds the crew assisted in the ignition and then monitored the burn before finally blacking out.

On the weekend the brigade was on two shifts working most of Saturday until Sunday morning at a major City of Busselton burn in Carbunup, This well run burn involved the Light Tanker with Emma and Noel and the 3.4 with Andy, Alan, Kevin, Rob and Steve during the day. They worked from midday to 16:00 raking and shovelling around “significant” trees, to protect them from the overnight burn.

The area is of environmental interest, and the map they were provided with showed the location of rare orchids and habitat trees.  The objective was to rake around the habitat trees identified with a yellow tape, other large trees, and large fallen logs in order to prevent/reduce the risk of the trees from burning.  A member of the Dunsborough brigade had a GPS and camera, and  checked each of the marked spots.  Lunch was available from the Carbanup store.

The weary crew was then replaced by the 4.4 with Craig, Dick, Douglas, Fish and Steveo. After a 4pm briefing they spent the night monitoring hotspots and blacking out. Dinner was served at seven with a late night meal around midnight. There were no complaints about the Italian food and it kept the crew going until 6:30 the next morning. A very long shift.

Sunday, the last day before permit season, saw a significant private burn being called in. Duncan and Emma in the Light Tanker and Andy, Bevan, Pete and Tony in the 3.4 spent two hours making sure the fire didn’t escape and blacking out. Fish was in control with the help of David. 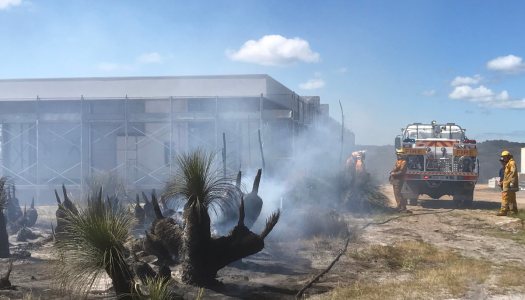 The brigade was called out to assist Wilyabrup in putting out a number of burning grass trees at a property under construction on Moses Rock Road midday Saturday.

The 4.4, with FCO Fish driving and Andy, Kevin and Ross, joined the Wilyabrup  and Metricup Light Tankers in containing and then putting out the various fires. The volunteers spent over two hours on the operation..

That evening the FCO was called out to two very large piles of cut bush that were burning unmanned and had been called into DFES by worried neighbours.