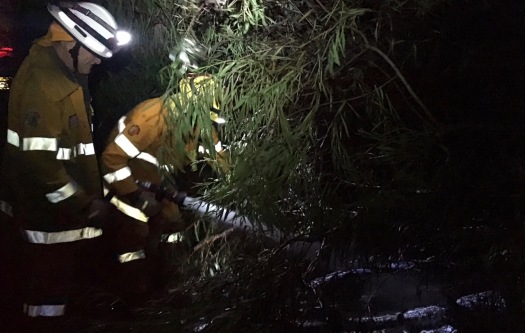 The brigade was back in business Saturday night, responding to a fire at the end of Lagoon Drive. Many members responded to the 9pm callout for all trucks.

Fortunately there was no wind and the residents had the fire under control by the time the brigade arrived. Duncan and Emma arrived with the Light Tanker to black out while the other trucks were stood down.  Annie and Mark P,  Bevan, Douglas, Fish, Kevin, Joe and Tony were also on the scene.  Alan, Andy, Bob S, David and Mike B were on the stood down trucks.   And Barb and John coordinated.  By 10pm the brigade was on its way home with another reminder that although the fire season may be over, fires aren’t.