The brigade’s team at Jarradale did two shifts before returning to base Wednesday night.

Matty. Mike, Mitch and Steveo headed north at 6am Tuesday as part of a taskforce which also included  Wallcliffe 2:4, Cowaramup 3:4, Sussex LT and the 12:2.
They arrived at the Control Point at 10:30 and carried out a full shift of blacking out in very rough terrain. The 4.4 was pushed to extremes on some very steep hills and at one stage had to tow out the Incident Command vehicle.. 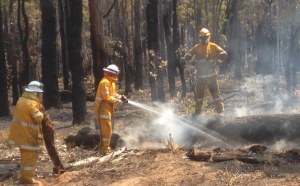 After a short night the crew was back at work continuing blacking out. They wrapped up around 15:30 and were back home by 19:00 where they were met by a welcoming/cleaning party that went to work on the truck.

Unfortunately Flo is a no with the 12.2 tanker out of action due to tank problems. It was driven by volunteers from the Vasse brigade. It’s not clear if it was wearing a “I’d Rather be a Vasse Truck” sticker at the time of the trouble.