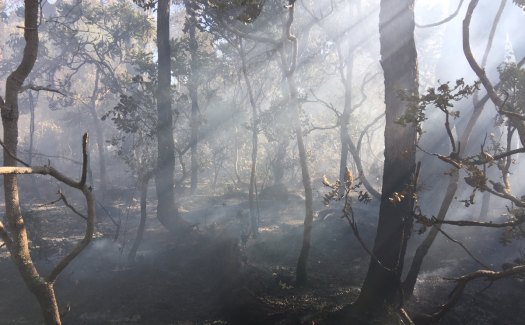 A bush fire kept both Yallingup brigades busy Wednesday afternoon.  The fire escaped from an earlier burn and got into adjacent heavy bush at a property off Wildwood Road,

The Rural Light Tanker, along with the two on loan to replace the trucks being serviced, joined two trucks from Coastal and worked from 3pm to 6:30pm putting out the fire and blacking out.

Emma and Tony in the brigade’s Light Tanker joined the Coastal 2.4 and 3.4 in attacking the fire with Fish in charge. They were quickly joined by Allan and Hunty and then Dave B in the loaner LTs. Todd, Chris and Bevan went straight to the fire and worked with the Coastal trucks while Mark P joined Dave in the LT.

The heat imaging camera got used for the first time, identifying hot spots that needed further attention. Specifically a large tree was found to be burning internally and needed additional water.

Due to the density of the bush a dozer was brought in to clear a fire break around the burnt area and the brigades spent the last few hours blacking out. The city did a good job providing food to keep the brigades going. and the 12.2 to keep the water going.

The previous day the brigade was called out to a fire off Commanage Road but the Dunsborough brigade  arrived first to do the heavy lifting.