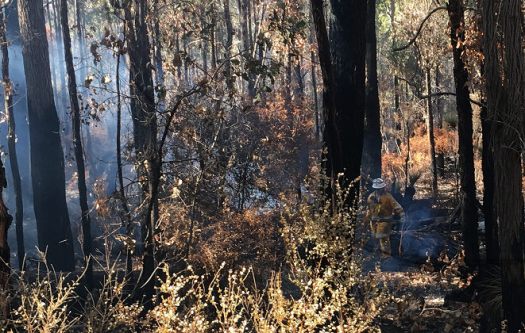 Two Rural crews were sent to the Gregory and Ellis State Forest fires in the Shire of Nannup Sunday. The fire had been reported the previous afternoon and was the result of a prescribed burn carried out a month earlier, according to Parks and Wildlife, which was managing the fire.

The first crew, consisting of Andy, Emma, Leisha and Mark P along with driver Kim Standish from Coastal left at 11 and after a briefing at the control unit on Brockman Highway spent the day blacking out in rough, hilly, burnt out forest in hot conditions. After a lunch break they continued on until 6 when they were relieved by the second crew, consisting of Bevan, Carlo (welcome back), Mike and Noel.

That crew had left the Dunsborough fire shed at 4:30pm with crews from Duns and Vasse.
They eventually started mopping up at 9pm, working alongside a crew from Cowaramup. Along with mopping up they used their drafting skills to fill two other trucks. They finished mopping up at midnight, departed Incident Control around 12:30am and finally left a clean (note to Steveo) 4.4 in the shed at 2:20am.