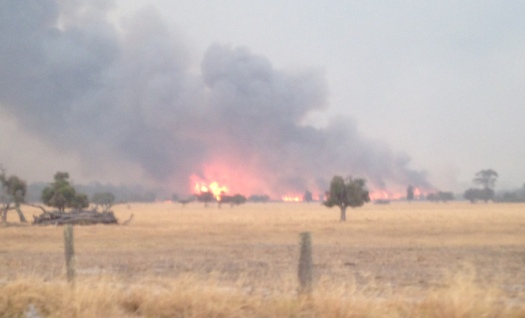 Rural has been sending a steady stream of crews to help fight the Waroona-Harvey fire. Crews are currently being scheduled up to Tuesday night.

The first crew with Andy, Carlo, Matty and Mitch returned Friday night after spending the day protecting properties around the townsite of Cookernup, north of Harvey. They were part of a task force under Busso FOC Alan Guthrie which included crews from Busso, Sussex and Margs. Work included putting out running fires up to 3k from town. Wind changes during the day and a thunderstorm complicated life by changing the direction of the fire a number of times.

Saturday’s crew of Leisha, Stando, Steveo and Tony spent most of the day north west of Harvey protecting a saw mill and adjacent properties. The combination of burning piles of lumber and the weather made for very hot work. Under Stando’s leadership they were able to have a fire break created that should provide a western limit to that section of the fire. They also spent time chasing down grass fires. Steveo did a good job of avoiding getting bogged in the sandy soil, unlike our neighbours from the west! Their task force consisted mainly of crews from the Denmark area.

The Saturday night crew consisted of the two Mikes and Todd. Sunday morning Alan, Duncan, Douglas and Mark P left at 6am for a day’s work. Sunday night Adam and Andy (we ran out of A’s) are heading north.  Monday morning it is Bruce, Kev, Pete and Steveo-again..  (Pictures courtesy of Duncan, Matty and Tony)