The brigade helped it’s neighbor, Dunsborough, put out an escaped burn Thursday afternoon on Yungarra Drive. David, Pete and Tony S turned up as the Dunsborough trucks arrived, with both Pete and Tony being nearby when the alert went out.  Within minutes Emma and Stevo arrived on the Light Tanker and then Bruce, Douglas, Matty, and Mitch arrived on the 4.4 joined by Mark. P. The fire was quickly extinguished and blacked out.

On Tuesday night all trucks were out for a burn on Blue Orchid Court. It started at 4pm and wound up around 8:45.

All the brigade trucks were out Monday afternoon assisting our neighbours, Wilyabrup, with a fire on Moses Rock Road. The quick turnout prevented the out-of-control burn from spreading into denser bush as the breeze picked up.

The 4.4 was first out of the gate with Andy, Bruce and Matty, shortly followed by the 1.4 with Douglas, Mark P, Pete and Tony S. They were later joined by Adam and Emma on the Light Tanker and Alan and Annie on the 12.2. Fish managed the fire and David helped with the plumbing.

The alarm went out a little after 1:30 and all the trucks were back by 16:30. It was the first fire of the season, one day later than last year’s first.

Other recent events have included a false alarm last Sunday, assisting Yallingup Coastal and DPAW with a burn in the National Park, attending the Fire Expo at Dunsborough Saturday and helping with a number of private burns.

Energy Safety WA has released its report on January’s  Cairnhill fire and it identifies what it sees as the source of the fire but the cause could not be determined. 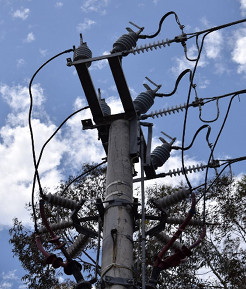 The report also points out that Western Power was not aware there was a fire when it tried to turn the power back on 24 minutes after the power was automatically shut down. WP then sent an “operative” to the site and he was informed by DFES of the fire.

The report, which is available here makes no reference to earlier electrical related fires in the area and no recommendations were made.

The fire occurred on January 5 and resulted in the destruction of the Cairnhill B&B.  The quick response of the Dunsborough, Yallingup and Yallingup Rural brigades stopped the fire from reaching neighbouring houses. 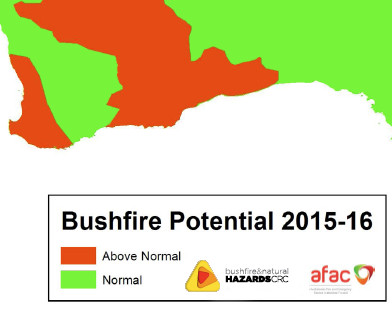 There is a higher than normal bush fire risk this summer according to a report released by the Bushfire and Natural Hazards CRC Tuesday. A lack of rainfall, a longterm deficit in the soil moisture and high fuel loads have led to an above normal fire potential this summer in the South West, the official forecast of the 2015-16 bushfire season states.

The report states “The 2015-16 southern fire season comes against a backdrop of long-term drying, record warmth in the Indian Ocean and
the continued development of a major El Nino event in the Pacific. Across southern Australia a pattern of drier southern wet seasons (April to October) has continued for more than 10 years leaving substantial rainfall deficits. The below average rainfall has been accompanied by above average temperatures, with the past decade being the warmest on record in many areas. The pattern of long-term below-average rainfall and above-average temperatures means that conditions such as soil moisture and fuels are prone to rapid drying with the approach of summer.”

Regarding the long term trends, the government funded research centre said they “will challenge the limited resources of the fire and land management agencies and have created the situation where each fire season is likely to be more demanding than the last, both in economic and human costs.”

The climate outlook will be updated by the Bureau of Meteorology around the end of each month.

Flo, the 12.2 water tanker, made her debut earlier this month, supporting the brigade at a fire in Kalorup.

On Saturday, March 8 the brigade’s 4.4 was called out to assist  Metricup and Kalorup brigades with a pole fire on Gale Rd. The crew was Muir, Hunt, Stevens and Lawrence. The objective was to help put out and overhaul a pile of hay bales that were alight. Other appliances used were a loader, two helitacs and the 12.2 which was driven by Yardley and assisted by McDowell. It took about 8 minutes to load the tanker from a hydrant.

On the next day the 4.4 was again called out. This time to assist Metricup and Willyabrup brigades with a fire on Carter Rd. Metricup ( behind Cape Lavender).  According to local press reports, the Fire and Emergency Services community officer, Tim Wall, said the blaze was started by a backpacker who accidently lit a fire.  The crew was Muir, Fisher, Stevens and Jones. Other appliances included two helitacs and the DPAW ‘dozer. The 4.4’s objective was to assist in blacking out and waiting for ‘dozer to arrive to fall a old burning Redgum and put it out. There were about 30 fire fighters at the scene.

Did someone say a quiet fire season?  The brigade responded to two fires in 24 hours this week.  The 4.4,  with a crew of five, went to the Kangaroo Gully fire, outside Bridgetown, early Tuesday and did a 12 hour shift, mainly blacking out. A lot of the work involved steep hills alongside pine plantations.

Roughly six hours later, at 1:45 Wednesday morning, the brigade was called out to a fire  a lot closer to home,  Kangaroo Parade.  The 4.4 and 1.4 spent over two hours mainly blacking out and putting out spot fires. Andy J, Alan Y and Matty did double shifts, all day at Bridgetown and overnight in Yals.

Dunsborough and Yallingup Coastal brigades both assisted at the Kangaroo Parade fire.